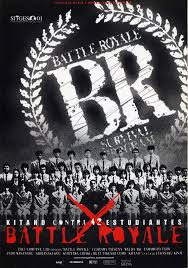 I’ve decide to use my long-suffering website to just talk about things I love. So, I will continue this I Love… series by talking about a movie that has heavily influenced me and in doing so highlights a key feature of my current novel New Sword Smell which is being written and shared as part of The Grim Tidings Podcast Patreon at the moment. If you’d like to see how it is developed, sign up!

Years ago when I first got into horror movies, there wasn’t much that really “shocked” me. However, the controversial Japanese movie Battle Royale made me realize real horror isn’t necessarily ghosts, chainsaws, and typical horror fair. It is paranoia.

Some of my favorite movies deal with paranoia: The Thing, Cube, The VVitch and many others. What Battle Royale does that amps this up is that the paranoia is connected with high school-level social interactions. Romantic crushes, bullying, and piecemeal alliances make for heightened tensions. It is also deals with the fickleness of being young in general. All of this is in play, but combined with hyper-violence. I guess when I was young, the violence of the movie was what shocked me. As I’ve grown older, the detachment to violence as a means of survival is what has stuck with me. At the root of this is paranoia. Fear of your friends and acquaintances killing you hits so much harder than the fear of strangers.

The game show element of the show is another intriguing aspect. Battle Royale doesn’t shy away from the ridiculousness of the game, which is something that gives such a stark contrast to the dark nature of outcome. Announcing those who were killed amplified how brutal the game was while also showing how fragile some of the alliances are in the end. Some of the “players” die because of sheer stupidity, others because they were in the wrong place at the wrong time, and others by being outsmarted. All of this plays into the game show format. Luck, cleverness, and distrust are the keys to winning.

One reason this movie always pops back into my mind is because it always feels like we’re two steps away in society to this actually happening. That is the real fear. Are we approaching The Hunger Games yet? No, but we have reality shows like Big Brother and Survivor that utilize a lot of the same ideas but without the violence. The violence is what always seems to stand out for people, but I feel the bankrupt morality of the movie’s world is what remains ingrained in my mind.

As I write my own fantasy story with elements of Battle Royale tied-in, I have to consider these elements. The violence of course will be there (it’s Splatter Elf after all), but I think ultimately when I finish the novel, it will actually end up utilizing what I fell in love with in regards to Battle Royale.