Welcome to the first edition of Overby’s Current Obsessions(that branding shit everyone talks about), all my geekiness squeezed into weekly blog posts. This is a place for good ole retro nostalgia, neo-retro pixelations, TV gems, hot AF games, and the books that have currently crawled to the top of my TBR Infinity Tower. I have a lot of shit on my plate (not literally) so I always have something to ramble on about. In addition, I’d love to hear from others about what they’re currently marinating their brains in.  Feel free to share in the comments, on Facebook or Twitter.

Books are undoubtedly my lifeblood so its no coincidence I’m starting with a couple of books I’ve recently wrapped up in addition to what I’m currently reading. I read a lot for The Grim Tidings Podcast, so I’m going to keep my choices here to whatever I’m the deepest into.

A Crown for Cold Silver by Alex Marshall 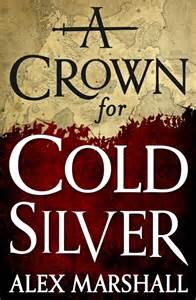 After really enjoying other books by the author also known as Jesse Bullington, I’d heard lots of good things about A Crown of Cold Silver. I checked out the sample on Kindle and got hooked immediately. This is the kind of fantasy I want to read now and forever. It’s at times humorous, bloody, has an intriguing cast of characters, and pulls from various cultures to make a fascinating world. Tying in devils, witchcraft, and other dark subject matter makes this a must-read for fans of darker-tinged fantasy. I’m still reading it and actually was encouraged to book him for The Grim Tidings Podcast once I picked it up. 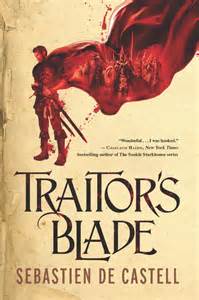 Speaking of The Grim Tidings Podcast (a theme you might notice), speaking with Sebastien de Castell let me know I’d love his work. His dialogue is snappy, characters are fun, and there is plenty of swasbuckling action for those that dig it. The Greatcoats Series has gotten loads of praise from all over the SFF community so you can’t go wrong with checking this out. I’m currently about half-way through the first book Traitor’s Blade and I’m excited to read the rest of the trilogy.

A Head Full of Ghosts 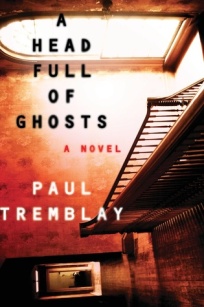 For Octoborror, a month supporting horror fiction, Paul Tremblay was at the top of our list as a guest to get on the show. I haven’t read much horror in recent years, but was a big fan of Stephen King and Jack Ketchum back in the day. This is one story that resuscitated my love of horror, dealing with a girl who may or may not have demonic problems. I’m really excited to get back into horror again and A Head Full of Ghosts is a great re-entry point.

I recently wrapped up reading Black City Saint by Richard A. Knaak and it wowed me on multiple levels. I wrote a review recently and talked about how I loved the combination of noir and the Fae, making a unique entry into the fantasy field. Since I grew up reading books like Legend of Huma (the first fantasy book I actually read), I’ve been a fan of fantasy ever since. It’s awesome to see Knaak kicking ass in a different genre.

Netflix is crack for many people, me included. With the wealth of new content, there should never be a lack of shows to watch. The latest ritual in the Overby household is to watch That 70s Show while we eat. I missed most of it during its heyday and would watch it occasionally if I was bored. However, now I know why it was popular for so long. Its writing is top-notch, the characters are cast and played to perfection, and it perfectly captures the 70s nostalgia without beating your over the head with it. Classic TV.

“Have you seen Rick and Morty yet?” My friends obviously know my tastes well because I was asked this several times before I actually got around to watching the show. It’s genius on multiple levels and offers a fresh take on time-traveling and SF by going full-on weird. Seriously, if you’re into a weird, insane, and sometimes even heart-warming (?) take on classic SF tropes, then this is the show for you. Currently my #1 show period. I’ve mentioned to people before that if I did some kind of Splatter Elf SF (Splatter Elf 400 Billion) then Rick and Morty would probably be a huge inspiration.

I’m a gamer, not hardcore, but medium-core I’d guess. Rogue Legacy takes ideas of both casual gaming and hardcore gaming and punches you in the face with it. Like other hell platformers, Rogue Legacy will kill you. Over and over. That’s the fun of it though because after you die, one of your descendants takes over with their various quirks, powers, and restrictions. It’s the perfect game to play for my Nine Lives series of Youtube videos, so expect that for sure! If you want to see me die in a similar fashion, here’s me playing Slain: Back from Hell: 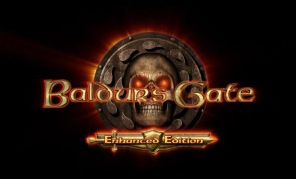 Since I love these kind of games, Baldur’s Gate Enhanced Edition was a no-brainer. It’ll be my featured “RPG Explosion” game for November, which means I’ll be playing it without loading if a character dies until either I beat the game or everyone dies. I most likely will keep the game updates to text for now, but if there’s a loud scream for more Grim Gozzoth (who will be making an appearance now and again if you’re a fan), then I may do the occasional video. One thing I already love about the Enhanced Edition is the ability to create your own party a la Icewind Dale. So I have my full band of weirdos from the previous playthroughs (Grim Challange, Mimi Mirrors, Goatscream, etc.) and some new faces as well.

A game I just picked up for free (you can pay for more content though), Final Fantasy Brave Exvius scratches the old school fantasy itch with a bit of modern tap, tap, tap mobile gaming casualness. The characters are interesting so far and you can summon your favorites from other Final Fantasy games to fight alongside you. It’s pretty genius and is a fun time-waster to fight the classic Final Fantasy monsters on the go.

I recently started a free trial of Amazon Music, which I already love more than iTunes because of its ease of navigation, and I was able to find some rad playlists. Washed Out stood out to me the most from some of the music I listened to and I’ve since been playing this groovy, chill-out electronic track on repeat. Edit: I knew I recognized this from somewhere! It’s the theme to Portlandia!

Well, shit, of course goblins. A good ole blog post wouldn’t be complete without a little shameless plug, so One Goblin Army, my first Splatter Elf novella, is now out on Kindle. There’s been good feedback so far and I hope that more people will pick up the previous stories. Goblins have been something I’ve been intrigued about for a while. They’re small, usually attack in hordes, and have been seen as the lowly peons of the fantasy world. Yet in One Goblin Army, Grinner has a chainsaw and kills a bunch of folks himself, so I’m hoping to show goblins aren’t just peons, but can also be badasses in their own right. The awesome web comic Goblins also plays up this idea and is one of my favorites out there.

I drink a shitload of ice coffee. Or some variant of it. It doesn’t even matter what season. I love it forever and ever.

Sloths are the new animal I love to watch. It never gets old watching a sloth eat carrots. Go on. Watch it.

That concludes my first Overby’s Current Obsessions! Tune in next week for more obsessive behavior!

What are some of your current obsessions? Share in the comments or on your social media of choice.