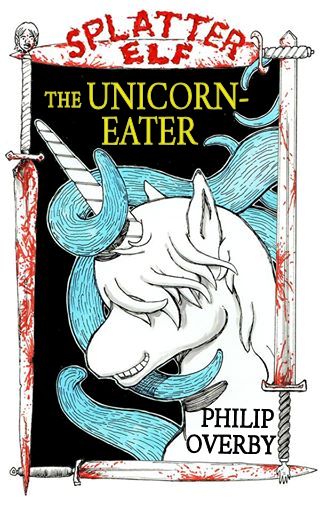 For the next few days, from August 28th-31st, 2016, I am celebrating over one year of Splatter Elf existing in the world by offering all of my stories for FREE before the release of my next novella, One Goblin Army. To say I’ve done a middling job of promoting my stories would be an exaggeration. So in order to rectify this situation, I’ve decided to try something a bit different to get the word out. I’m doing readings as Grim Gozzoth in hopes of sharing what I’m doing more.

A little backstory about The Unicorn-Eater first. I came up with the idea shortly after writing The Bloody Unicorn on Tablo for a contest. While I was in the final four chosen in the end, I didn’t receive a contract. However, I felt like I wanted to tell more stories about unicorns. I’ve always had an affinity for the cute/pretty and grotesque mashed together. I need a voice to capture the essence of this newly invented Splatter Elf universe. Along came Katzia. A foul-mouthed, sword-hording half-elf, I wanted Katzia to be the exemplary “badass” in every sense of the word. Which meant sometimes she tried TOO hard to be a badass. I wanted a flawed monster hunter character, but that had both bark and bite.

I also have enjoyed Lovecraftian imagery, demonology, mythology, cryptozoology and the study of the paranormal and supernatural for a long time. The Thing is one of my favorite movies ever, so I tried to imagine what The Thing would be like if it started eating unicorns and then attempted to replicate their appearance and failing miserably.

This Splatter Elf journey started back in May of 2015, so I’m hoping to continue to try new things to spread the word. If you enjoy this Grim Gozzoth reading, please let me know as I was continue to do so for existing Splatter Elf stories and perhaps even share NEW stuff exclusively on my the Splatter Elf Youtube channel.

That said, here is the first SCROLL OF FLAYED FLESH featuring The Unicorn-Eater! Enjoy!